Samsung Galaxy M31 is available in Kenya for a suggested price of around 32000 Kenya shillings. Its key features include a mega 6000 mAh battery, a triple 64 MP primary camera, Exynos 9611 and 6.4 inches Super AMOLED display panel. Find out in this article why it has been nicknamed the #Mega-monster. Be sure to check out Galaxy M30s which it is speculated to have succeeded.

Shots taken by Samsung Galaxy M31 are astounding, amazing and staggering thanks to its 64 MP quad camera setup. The 64 MP wide shooter is its main lens and with it come three other lenses. These are, an 8MP ultra wide, a 5 MP macro lens and a 5MP depth sensing camera.

Let’s bring it back real quick here. You must have read it as fast as I typed it. The main camera lens of Samsung Galaxy M31 has a whopping resolution of 64MP. Resolve also to buy this phone and enjoy great images its camera produces. Here is detailed information on each of the four lenses:

Furthermore, within its U-shaped notch is 32 MP selfie camera. Yes dear reader that is correct. You read that just fine 32 MP. To use words in describing this selfie camera would only blur the clarity of the selfies it takes. I mean Samsung Galaxy M31 has a 32 MP front facing camera. Consider even its price point; what more could anyone possibly ask for? By the way, video recording is 4K up to [email protected] with the main camera lens.

One of the best performing mid range smartphone in Kenya is the A51 by Samsung thanks to its Exynos 9611 chipset which Samsung Galaxy M31 also has. Yet the price of the former is thousands more than this one’s. I hope you can see where this is going. M31 is powered by Android 10.0 with Samsung’s One UI 2.0 skin on top.

Expect at most two years of Android upgrades with it. Galaxy M31’s internal storage is either an expandable 64GB or 128 GB. Both run on 6GB RAM. This UFS 2.1 internal storage can be expanded using micro SDXC (see also a30s) . Also on board is:

So far so mega nay? You wouldn’t even believe Samsung Galaxy M31 costs just around 30k in Kenya. Guess what else, for this much and this much only you get a 6.4 inches Super AMOLED display panel. I wish I could rewrite Super AMOLED in bold just so you don’t miss it. A crisp display it is with 411 ppi density, a 1080 x 2340 pixels resolution and 19.5 :9 (nineteen point five to nine) aspect ratio. Learn more here.

We save the design of Samsung Galaxy for last because the features first described are, in our opinion its best features. So this phone has a glass front, a plastic back and comes with a plastic frame. A move to cut down on cost since plastic is cheaper than glass or metal.But this does not in any wise make M31 feel or look anything cheap.

It has a U-notch, rear mounted fingerprint scanner and an upside down L-shaped camera module. It is relatively compact should you put 2020 standards into consideration. This phone is available in two color options namely Ocean Blue and Space Black – you decide which color you like. 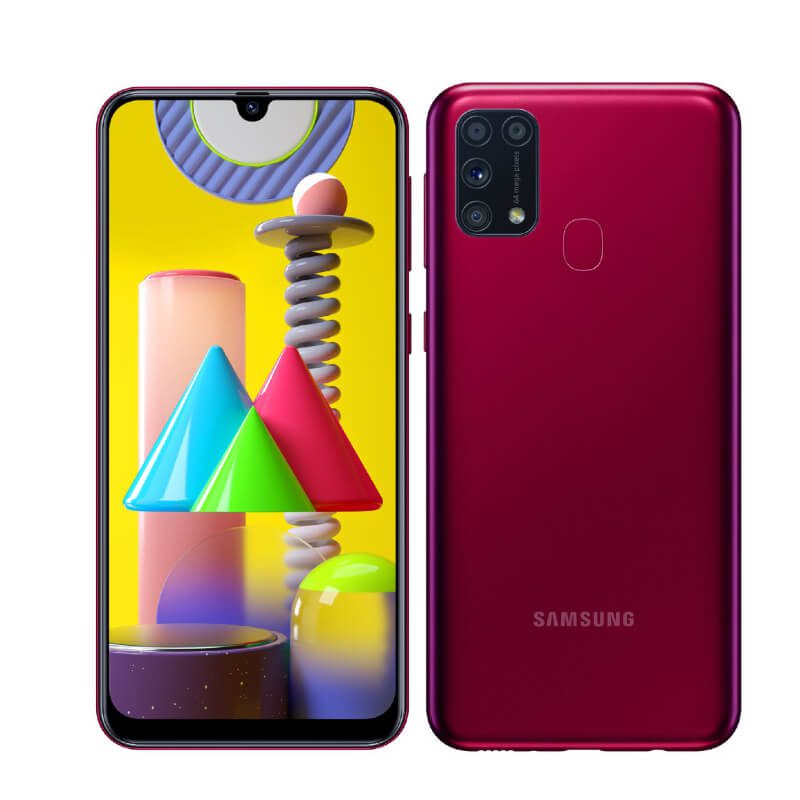